Schedule an immediate backup of a protected system- x360Recover BDR

AutoVerify is a new and improved method of validating and testing the integrity and recoverability of protected systems released with x360Recover version 8.3.0.  [Learn more about AutoVerify:]

With AutoVerify, each nightly Boot VM check performs a series of deep system integrity checks within the running virtual machine, to ensure that the protected system backup is both healthy and ready to recover in the event of a disaster.

AutoVerify provides a more thorough backup integrity check than the legacy Boot VM Check.  It also has the advantage of performing automated validation of the results rather than relying on manual interpretation.

To resolve issues reported by AutoVerify, consult this guide or contact Axcient support for assistance.

This guide will attempt to define the possible issues that may be reported and provide directions on how to troubleshoot and correct those problems that are discovered.

AutoVerify is an enhancement to the existing nightly Boot VM check process.

When Boot VM checks are enabled for a protected system (and this is strongly recommended),  AutoVerify checks will be performed as part of the process.

Before launching the Virtual Machine (VM), a communications driver is injected into the protected system image.  Once the VM is booted, the appliance communicates with the running system and issues commands for Windows to perform specific tests.

This process can fail at multiple points along the way:

As of the 8.3.0 release, there are two primary tests performed by AutoVerify:

A global overview of AutoVerify status can be found on the Health or Trouble report pages of the Global Management Portal.

Detailed status results can be found on the Details page of each protected system.

Clicking on the results will display a detailed breakdown of the steps performed during the check: 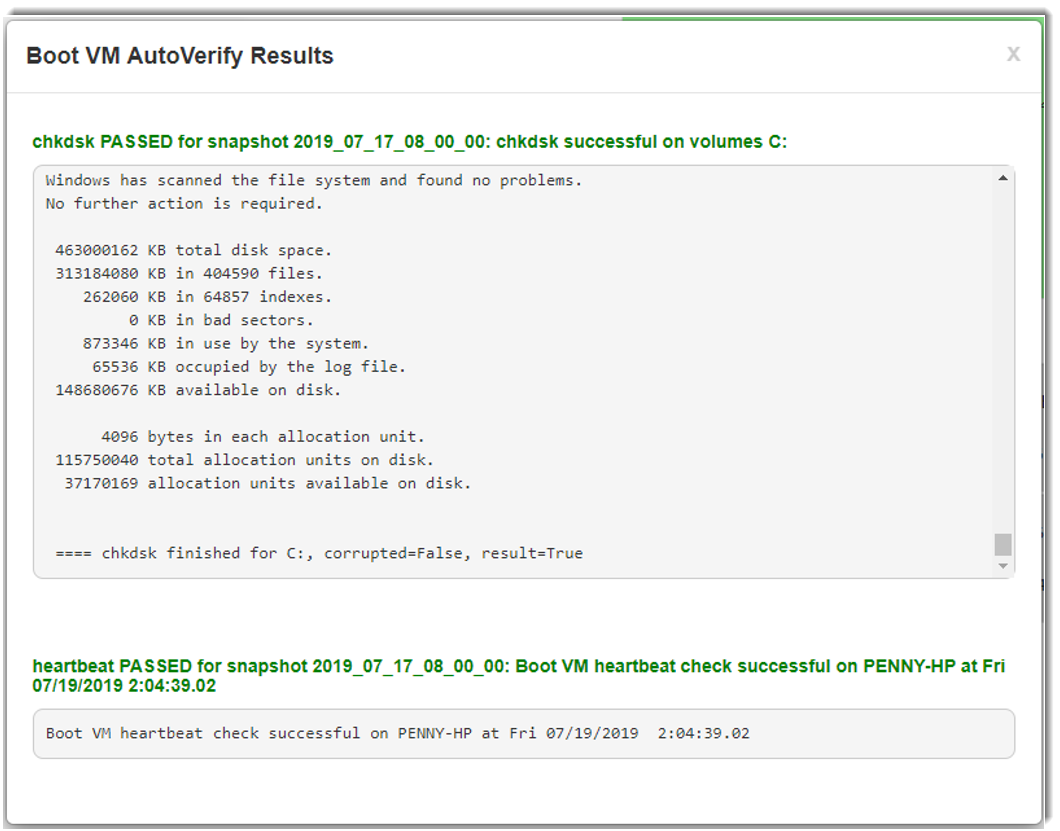 In this case, the x360Recover BDR was unable to perform a test for the protected system.

Examine the protected system on the BDR and test the StartVM feature.  If the failure reason is not obvious, contact Axcient Support for assistance with further troubleshooting.

The heartbeat check verifies that the Virtual Machine communication driver is able to connect to the running operating system.

1. Examine the protected system on the BDR and test the StartVM feature.

3. If the protected system will not boot, exhibits a blue-screen crash or has other errors, contact Axcient support for assistance in troubleshooting the underlying Boot VM failure.

The chkdsk test is the most complex to troubleshoot, as it can fail for a variety of reasons.

( chkdsk is a Windows utility that checks the integrity of a file system.)

The backup image data could be corrupt on the BDR, or the source protected system could have file system errors.

In rare cases, the Volume Shadow Copy services (VSS) may not start within the Virtual Machine.  (Chkdsk requires a VSS snapshot to check the running file system. VSS failures will cause a failed AutoVerify check.  In this event, the state of the file system is essentially unknown because the chkdsk results will be invalid.)

If you see the following message in the chkdsk output: The volume is in use by another process. Chkdsk might report errors when no corruption is present then the VSS services were unable to start.  In this case, please open a support ticket with Axcient support.

For any other issues with AutoVerify or Boot VM checks in general, please contact Axcient Support for assistance.

When backups stop running, and there is no error showing in the backups, it is pr...

When you have successfully completed a recovery or import of a protected system, ...

Problem: Backups on the vault are grayed out and I cannot select them The vault i...