How does SentinelOne work with x360Recover?

SentinelOne is a popular antivirus platform which is effective against both existing and newly-released malware. It offers file rollback for recovery, using Microsoft's Volume Shadow copy Services (VSS) to provide ransomware remediation.

However, SentinelOne takes a heightened security stance against other processes interacting with VSS. It may even block the x360Recover agent from deleting snapshots after a backup.

Improve interoperability of SentinelOne with x360Recover by

The following instructions will help in this process:

Configure SentinelOne to work with x360Recover

STEP 1. Add an exception for Axcient products in SentinelOne

Unfortunately, while this method can be highly effective in identifying new ‘unknown’ malware, it also has a tendency to generate false positive hits on some types of trusted software.

Signing a certificate is the simplest way to add an exclusion for Axcient products to SentinelOne.

How to sign a certificate excluding Axcient products in SentinelOne

All Axcient products are signed by our extended validation code signing certificate in the name of EFOLDER, INC

Note: This exclusion is effective for x360Recover agents, Recovery Center, and Axcient DirectRestore. (All are signed by the same Axcient code signing certificate.)

To create a SentinelOne exclusion, perform the following steps:

1. On the SentinelOne side navigation, click Scope and select a scope:

4. In the OS field, select Windows and then in the Certificate ID field enter EFOLDER, INC. 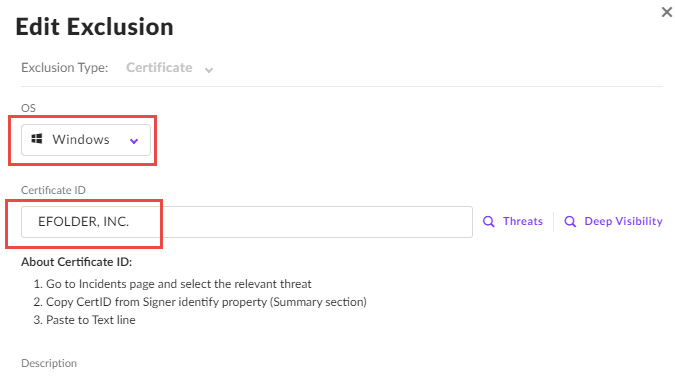 5. Click on either Save to complete this addition or click Save and Add Another to continue with additional changes.

Clean up the system

If shadow copy storage has become messy because SentinelOne was not allowing x360Recover to delete snapshots, perform the following steps to recover storage space:

STEP 2. Delete all the snapshots on the system to free storage space.

Note: You can set any minute interval you prefer for snapshot creation. The default is four hours. Please note that more frequent snapshots will require more free disk space on the system.

When a limit is set, Windows automatically deletes the oldest snapshot when the limit is exceeded. (This is necessary to avoid completely filling the volume.)

The number of previous snapshots retained for VSS rollbacks depends on:

From SentinelOne’s perspective, nearly any shadow storage limit is acceptable - as long as the system can create several snapshots before reaching that limit. Since SentinelOne is only interested in creating historical recovery points  and since SentinelOne is actively using the snapshots on an ongoing basis, it doesn’t matter when Windows eventually comes along and deletes the snapshot to recover shadow storage space.

However, from the x360Recover agent perspective, there must be sufficient shadow storage space available on the system so Windows does not delete our snapshot before we’ve completed taking a backup.

Ongoing incremental backups typically only take a few minutes to complete but the initial full backup of a system might take hours (or even days, for Direct-to-Cloud (D2C)systems.)

If the system does not have a substantial amount of free space on every disk volume available for use by shadow storage, it may be necessary to

Legacy partners with multiple vaults have the option to consolidate their cloud-p...