Sentinel One: Add an exception for Axcient

See which volumes are excluded from backup (and why)

With the release of x360Recover v 10.10.0 (along with agent release 2.30),  the UI on the protected system now displays the list of volumes being excluded from backup (for whatever reason) - along with an explanation of why this exclusion occurs.

Being able to see which volumes are excluded (and why) should make it easier to explicitly configure volumes you wish to be backed up. (You can now use agent orchestration  - without having to physically log in to a protected system to examine the disk configurations.)

Where do I see which volumes are excluded?

Excluded volumes are listed on the top-level Protected Systems page (in the Volumes column):

In the example above:

Where do I see why this volume is excluded from backups?

On the Protected System Details page, the display shows (a) volumes included in backups, as well as (b) volumes excluded from backups..

Excluded volumes display more detail, including a reason (in clear English) why this volume is not included in the backup: 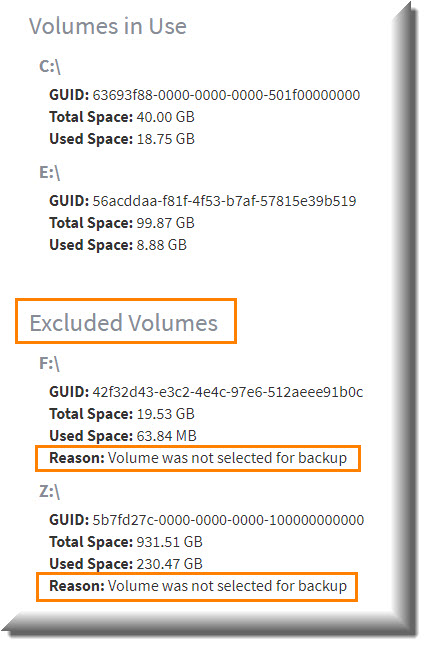 Reasons why a volume might be excluded from backup

There are many possible reasons a volume might be excluded from the backup, such as

Too many similar names for protected systems?  Many of our partners have reported...