4. Manage & monitor from vault or appliance

Virtualize in the Axcient cloud

Recover a protected system on a vault back to an appliance

What is local cache for D2C?

So, what does local cache for D2C do?

When enabled, local cache for D2C greatly accelerates the recovery of D2C-protected systems by eliminating the need to download bulky data from the cloud. 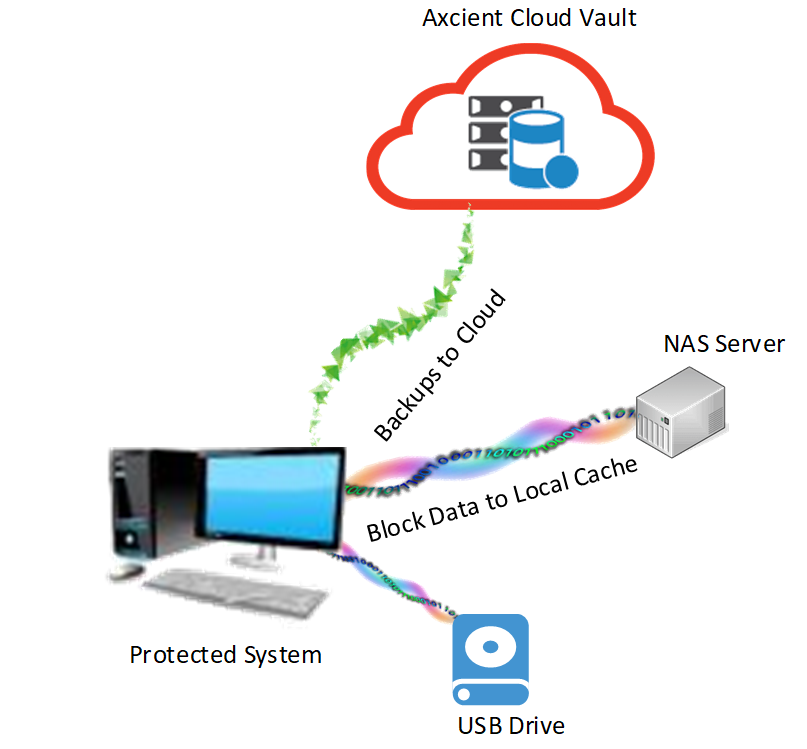 All backup data is sent to the cloud vault with each backup job. The cloud vault contains all metadata about the backups, including recovery points, volumes, disk topology, etc.

A copy of the actual data blocks for each volume is also sent to the local cache. Note that the local cache does not contain any metadata about backups or recovery points. Local cache is strictly a "big bucket of block data" that can be used to avoid downloading backup data from the internet during a recovery.

Local cache contains 64K data blocks that are globally unique, deduplicated within the database, and indexed by hash keys. Hash keys for a given recovery point are retrieved from the cloud vault during recovery and are then used to look up data in the local cache.

Note: You can configure local cache to a single target. The single target can be either (a) a locally attached USB device or other local hard drive, or (b) a network share.  Network share targets can be shared by multiple protected systems, and all data stored within the local cache will be globally deduplicated. This provides a slight improvement in overall storage efficiency.

Local cache for D2C can be configured to store data on either (a) locally-attached storage such as a USB drive or (b) on a network share.

To support these instructions, your CPU must be an Intel Broadwell design or newer, or the AMD equivalent, circa 2011.

How to enable local cache

We recommend managing local cache settings from the web interface on the vault.

1. Login to the vault via the Axcient x360Portal.

2. Navigate to the Protected Systems Details page, and select Agent. 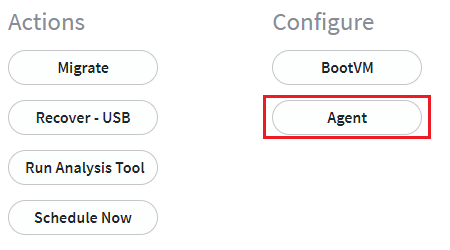 3. Within the Agent Configuration dialog, expand the Local Cache Settings: 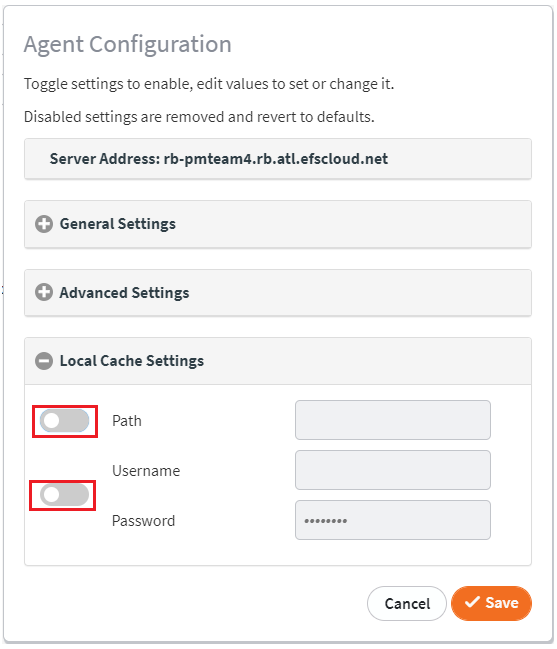 4. Click the toggle to enable Path and enter a path to the local cache. The path is relative to the protected systems being configured.

IMPORTANT NOTE:  You cannot use a mapped drive path to reference a network shared folder path for local cache.  This is because while your users may have a drive mapping for G:\ attached to \\Server\Share\LocalCache, the Axcient agent service does not log in as a user and has no access to network drive mappings.

Note: Usernames are expected to be in Windows domain format.

5. Click Save to create an agent configuration job to update agent settings.

6. You can verify the job status on the Jobs -> Agent page.

A local cache repository can be configured to be shared by multiple protected systems.

What are default local cache behaviors?

The x360Recover agent strives to achieve default behaviors that are applicable to most use cases  - without requiring additional configuration changes.

The backup agent uses various mechanisms to determine which blocks on each volume might have changed since the last backup.

For example, perhaps only a small portion of a 64K block of data may have changed. Only those changed bytes will be sent over the wire to the cloud vault. However, the entire block will likely be sent to local cache, because any changes within a block will yield a different hash key for that block.

Conversely, perhaps this block already exists in the local cache. This could happen because another protected systems has a block with the same data  (such as a Windows system file,  for example). In such a case, the data changes would be sent to the backup server, but nothing new would be written to the local cache.

If errors occur when writing to local cache during a backup, the default behavior is to log a warning and otherwise ignore the error.

Other configuration options exist: you can to force the agent to ‘log the event as an error and continue’ or ‘log an error and fail the backup’. We do not recommend either of these options because a few missing blocks within the cache is trivial, and any large number of missing blocks will be reported and self-healed later.  (See local cache verification below)

Local cache errors will be re-tried during a backup. Because failing local cache writes can delay completion of a backup, further re-tries will be aborted (after a maximum number of re-tries has occurred.) This helps to avoid affecting the overall backup completion time.

Important note:  It is not necessary for all block data to be present in local cache for you to effectively perform a recovery.  This is because any missing block data will be automatically and seamlessly retrieved from the cloud vault during the recovery operation.

What is local cache verification?

Local cache verification is a process which checks all data on the protected systems against the contents of the local cache repository. Any missing data is then flagged for inclusion during the next backup.

What happens If any blocks of data are found to be missing on any volume during verification?

Basic local cache status can be found on the Protected Systems page under the icon in the Status column.  Hover over the STATUS icon for a brief text description of the status.

More details about local cache configuration and status details can be found on the protected systems Details page.

Local cache verification is enabled by default in agent 2.32 and newer.

Planned enhancements: Management of verification controls within the vault UI will be included in a future release of x360Recover. Additional settings will be added to the agent configuration button within the protected systems Details page.

NOTE: The following configuration information is provided for reference only. We recommend that you accept the default behavior of local cache verification (performed once every 24 hours.)

By default, a new local cache verification job can be started during the assigned customer's business hours.

The agent determines business hours in one of two ways:

How to exclude local cache verification during business hours

Verification is an extremely low priority background job and is expected to have no noticeable performance impact on any system.

However, if you find it necessary to explicitly exclude verification during business hours, there is a configuration option available to address this. It is essential that verification be allowed to run periodically, however, so if times outside of business hours are not available, we will trigger jobs (eventually), as necessary.

Only new verification jobs are blocked from starting during business hours.

What is local cache trimming?

During the verification process, the time stamp on every block in the local cache on the protected system is updated. This time stamp determines which blocks are considered older than others.

Of course, protected systems might all have different backup schedules and different verification times. Due to the complexity of supporting multiple protected systems within a single local cache, it is not safe to assume we can delete blocks not seen in only a relatively few number of days. So, local cache trimming is hard coded to prevent removal of any block data less than fourteen (14) days old -  regardless of any other factor.

IMPORTANT NOTE: If the local cache device is too small to store at least fourteen (14)  days of block data, that device will be filled to capacity and trimming WILL NOT remove the data. Based on the cache verification algorithm, data in a cache cannot be deleted until it is at least 14 days old. Therefore, you always must provide a local cache storage device that is large enough to store at least the recent backup and 14 days of incremental backups.

Local cache trimming is enabled by default with agent 2.33 and newer

How is local cache trimming controlled?

You can specify how local cache trimming is performed and you can also define the thresholds when data will be pruned from the local cache.

NOTE:  The following configuration information is provided for reference only.  We recommend using the default behavior of local cache trimming at this time (which will maintain 15% free space on the local cache device.)

Planned enhancements to local cache trimming:  Management of trimming controls will be included in a future release of x360Recover, with additional settings added to the agent configuration feature within the protected systems Details page.

The default method of local cache cleanup is based on the free space remaining on the local cache path.

You can specify a maximum amount of storage space which the local cache is allowed to consume in GB.

Similar to setting a backup retention policy to retain a certain number of days of backups, this option aims to retain only block data that is not older than a specified number of days.

How to recover with local cache

How to monitor and troubleshoot local cache

How to read local cache reports

Scan results from local cache verification are sent to the backup server for reporting.

The results of the latest local cache verification are displayed on the Protected Systems page in the Status column.

Additional details about the local cache verification are displayed on the Protected System Details page. 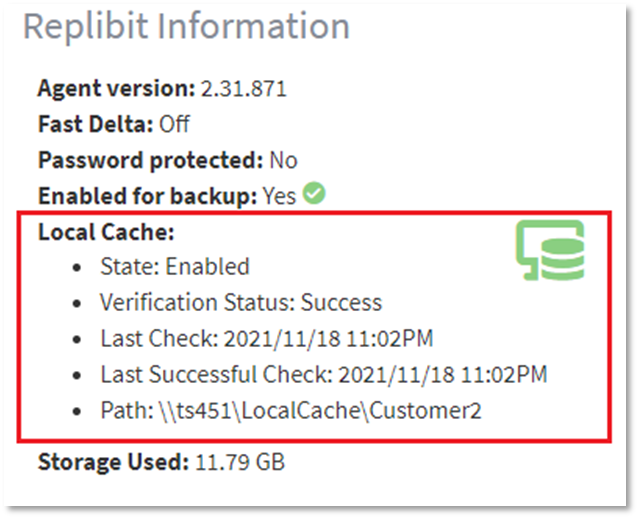 What do the status icons mean?

How to troubleshoot local cache by status

The status icon will be gray if you have not yet enabled local cache for your Direct-to-Cloud (D2C) endpoints (or if local cache verification has not yet been run).

Example: The default testing interval is every 24 hours. A yellow icon indicates that the most recent successful test is at least 72 hours old (but no more that 96 hours old.)

There may either be no more recent test attempt, or the most recent attempt may have failed. If the most recent successful test is greater than 72 hours + testing frequency hours old, the status will be elevated to failed

A red icon indicates that the local cache is considered to be in a failed state.

If more than 1% of total data blocks were found to be missing from the cache during the verification run and/or if the last successful verification is more than 72 hours + testing interval hours old, the local cache is considered to be in a failed state.

Local cache operations are recorded in aristos.log during each backup.

Errors related to accessibility, read/write issues, bad credentials/path, corrupted cache database issues, and other error types will all be found in aristos.log.

(Only partial log entries are shown as examples below)

A verification check that has run will look like this:

A verification check that has been skipped will look like this:

Overview  Why switch an agent from appliance mode to Direct-to-Cloud mode? What h...

Deploy a silent agent for D2C via RMM